Surprisingly there were no more car wrecks today. We ran six log and fast races. Our two GT class cars #1333 and #1135 remain tied for first with two other cars in their class.

Meanwhile #9, our Targa class entry incurred 18 seconds in penalties. It seems the co-pilot read driving and speed instructions from the wrong race, causing them to run slower than they should have. However in their Modern class they still sit in 6th place with a good chance of finishing well. The ever so popular race through Gander had to be cancelled as organizers felt there were unresolved safety concerns. This is a shame as this run which is usually done twice, is one of the highlight races of the week and watched by most of the folks living in this community.

Wednesday will be interesting as we see many new routes never before raced in this event. The weather was rainy to start the day today, then cleared up, but is now very chilly. Forecast tomorrow is sunny but crisp.

Until then, all for now,
From. Team Hume.

That pretty much describes the race today here I sunny summery Newfoundland.

At least 5 cars went off the road today for various reasons, mainly driver and co-pilot ran out of talent in each case.
JohnJr and Ron had to stop to lend assistance to the Kia car which as run off the road at one point. However, no injuries have been reported as a result of the multiple incidents.

The three remaining cars on the Hume team turned in perfect scores today. So are at the top of their respective groups to start Tuesday off.
That Laguna Sega Blue M3 (car #9) looks and sounds awfully good flying down the closed road race circuits. It has to be one of the quickest cars in the entire pack this year. However it had a retaining bolt in its suspension come loose late in the day our mechanic was able to fix it on the fly as it were, so no stages were missed as a result. Tonight Justin Crant is going over car #9 with a fine tooth comb to ensure no more loose pieces for tomorrow.

All team members are anxious to get back on the road early AM.
All for now.

One down, but three still on the go

We had our practice race day today (Sunday). Three races to determine how well driver and co-pilots in each of our four car team communicate together.
The weather was iffy with cloud, mist and a few downpours. The first race in Flatrock went off without a hitch. Then off to Torbay for two more races. 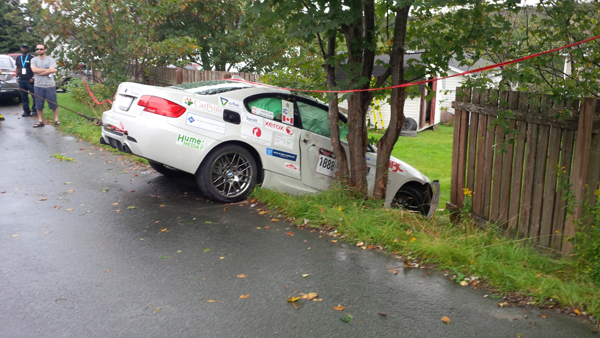 Three of our teams did very well scoring zero penalty points. However, John Sr and Justin Crant, car #1888, did it fair too well.
In their First run through Torbay coming out of a hair pin turn only 50 meters from the finish line, car#1888, fishtailed after hitting a wet spot, then careened sideways after sliding through a second wet spot. 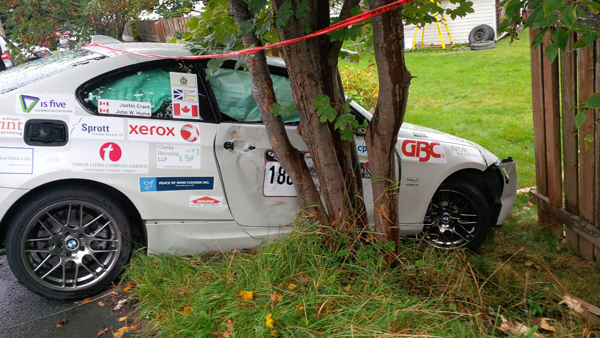 At that point no one was driving the car, as it was in full control of it’s own terminal destiny. Sliding off the left side of the road and smashing sideways into a tree. Then it kept going smashing through a 6 ft. high fence. Nobody was hurt. Although the passenger side airbags deployed as the passenger window blew out against the tree. 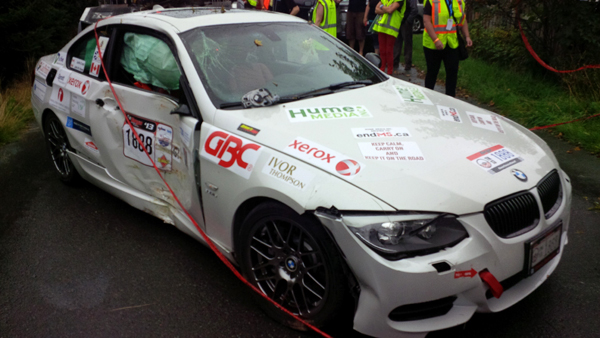 The car is terminally damaged and will not make the trip back home as it is. The tree is unharmed, just a bit shaken. But the fence needs replacing. Meantime John Sr and Justin Crant will, as of Monday be assisting as crew for the other three remaining team cars and staff.

All for now.
Bruised but not out by any means,
Team Hume. 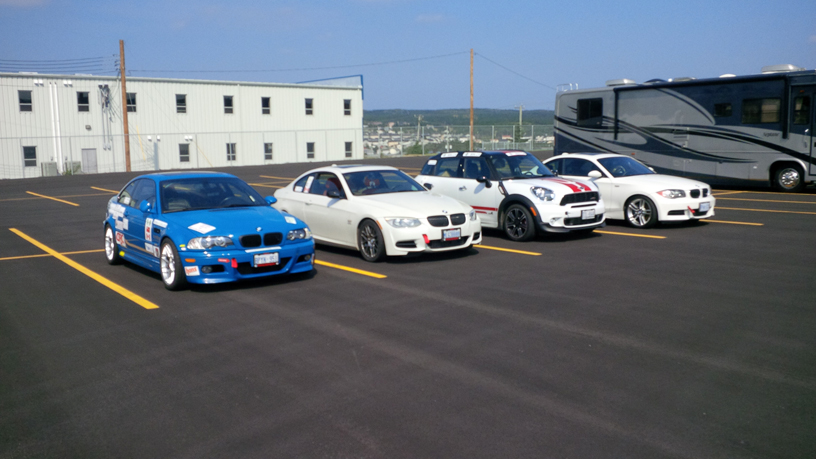 After the high drama of the “car hood stuck shut” incident last Thursday; our cars being dropped off three days too soon in St. John’s (Tuesday) without any security; thus requiring arrangements for transport to safe haven (thank you BMW St. John’s); plus a few other technical hick-ups; and a very nervous supplier phoning me last minute suggesting withdrawal of services rendered (no names Kim).
All this just to keep our stress levesl and blood pressures up, “PHEW!”
I say “Is it Friday yet?” The sooner the better.

A tropical storm warning is in effect for St. John’s for this Friday, Saturday and Sunday!!!
To date, our departure from Toronto to St. John’s is certainly “more interesting” and eventful than last year.

Wish us luck and a safe journey – and swimming is not on the agenda, so far!